The Best Kind of Truth

Write freely and generously and with careless truth.

–Brenda Ueland (from If You Want to Write)

Start at the Beginning

Much like you can’t jump right into the middle of a film and make complete sense of it, you can’t bypass the first 195 steps of storytelling and get straight to the wrap party (writers are invited to that, right?). It all has to begin somewhere.

In taking those first steps, it is all too easy to slip down a different yet enticing path. So let’s take a look at some of the distractions that I’ll often find myself stumbling over on the way to a finished product (these are specific to screenwriting, but the lessons are pretty universal). There is a lot to be said for self-control, but sometimes mental repetition of what NOT to do is enough motivation to do the right thing. The mind is a terribly fickle and easily distracted tool. It loves input and hates being denied the opportunity to run amok. Give it free reign and instead of an unforgettable story, it may just give you:

“What?” I hear you saying. How can you have any sort of movie poster without even the slimmest bit of a story? Text my dear, text. MOVIE TITLE plastered dead center in silver letters on a black backdrop. A release date at the bottom. A frustratingly vague tagline at the top. Something like: [box]When the world turned its back on him, he turned his back on the world.[/box] or [box]We didn’t know what we were dealing with.[/box] or even [box]I’ll take the salad AND the soup.[/box]

The point is, a movie poster represents a finished product. Not only have you finished your screenplay, but the movie is already being filmed and actively marketed. It’s a comforting but distracting fantasy. Don’t try to market your film before you’ve written the title page. In fact, don’t try to market your film at all. You may find yourself wondering if a more “marketable” idea would be more worthwhile (that debate is big enough for another few pages).

Not everyone wants to be “paparazzi hiding in your garbage can” famous, but most everyone wants to be at the top of their field. Well-respected and considered talented among your peers. This leads to more work and better connections. You want more work right? If writing brings you enjoyment, what better what to further your career than to earn more fun, well-paying assignments. A bit of fame also means that your next script will sell for more. Which leads us to…

“If I sell this thing, I will totally be able to afford health insurance!” The depressingly practical take on wealth and riches. Once you let yourself wander down this path, it has a tendency to let finances seep into the process. I personally don’t enjoy thinking about money, taxes or investing. Unless you’re writing about Wall Street, you should suppress it when it pops up for you as well. “Will I be able to pay the rent if this doesn’t sell?” “Would this be a $500 million movie?” [quote]People love movies with kids speaking like 25 year old grad students, right? That should give it at least a $200 million boost at the B.O.”[/quote]

Bringing money into the picture can skew your creativity toward the commercial and depress you if you’re not where you want to be from an earning standpoint. You don’t need that. Especially not when you’re trying to ramp things up.

Now that we know where NOT to start, where do we begin? Pretty much anywhere. Inspiration comes from the damnedest of places. These are my four most common starting points:

The driver on the bus you take to work every day has never said a word. He overhears a thousand crazy conversations a week. Does he write them down in his journal? Maybe he acts them out with puppets once he gets home, making sense of the snippets he overhears as he goes about his job.

Find an intriguing character (or traits) and see where it goes. Not everything can easily be formed into a screenplay, but plenty can. If it dead ends, fine. You’ve just created a backstory for a minor character down the road. Mark it (tag: backstory goodness). If the character speaks to you more and more, you’ll uncover more depth, some logical story lines, and even additional characters (your driver might need an arch nemesis, like say…a bicyclist).

A witty or poignant turn of phrase sticks with you. This is a favorite of mine even though it is seemingly the weakest. I have hundreds of lines of dialogue (usually one or two lines at a time) that are unattached to any project. There are no characters, no names, no storyline, no situation, nothing. The danger here is trying to force your clever words into becoming a story. It’s not always going to fit. Sometimes you’re just going to have to let it go. But when it does work, it can really pay off. Your dialogue wasn’t just witty, it was insightful. It pulled back a curtain on the human condition, and the human condition stared right back at you with its dead, haunted eyes. The character who speaks these words is on the verge of a personal discovery, but the man she’s talking to is secretly working against her. Expand and explore it.

Two housewives lock themselves in a pantry as thieves ransack the house, looking for a safe. The twist? One of the women suspects the other is sleeping with her husband. It boils down to a simple domestic dispute. An argument and confrontation. The robbery is just a stressor (and a time constraint). Find something unusual and take it halfway to the finish. If it doesn’t pan out, maybe you can still use it for a short. If it does, consider how your characters got there in the first place. What would logically lead them there? You may very well change the scene (or cut it) after learning all about your characters and story, but starting is the important part.

Yes, the end. The beginning of the process doesn’t mean the start of your story. The beginning is merely your first step (see above) in the creative process. The end of your story can be a great starting point. How does it all end? Does a couple wind up together? Does the world collapse? Is a lesson learned? Are there tears? Deaths? Party favors?

Here’s an exercise: [highlight]What has been your dominant emotion for the past day or so? Ok, grab ahold of that. Now end your story on that note (or the resolution of that emotion). Feeling inspired? Give us an ending that is inspiring both to the audience and the lead character. Feeling downtrodden? Show us the difficulty of life, of a situation, of a character in over their head. Or show them overcoming that obstacle to break through and see a tiny glimmer of hope. Keep going.[/highlight]

This is just a small sample of what is possible. Which is a good lesson in itself. So much is possible, so many stories are there, ready to be discovered. Don’t let mental distractions keep you from exploring your creative depths. We all have to start somewhere, and keeping a few tricks at the ready can help get the ball rolling. 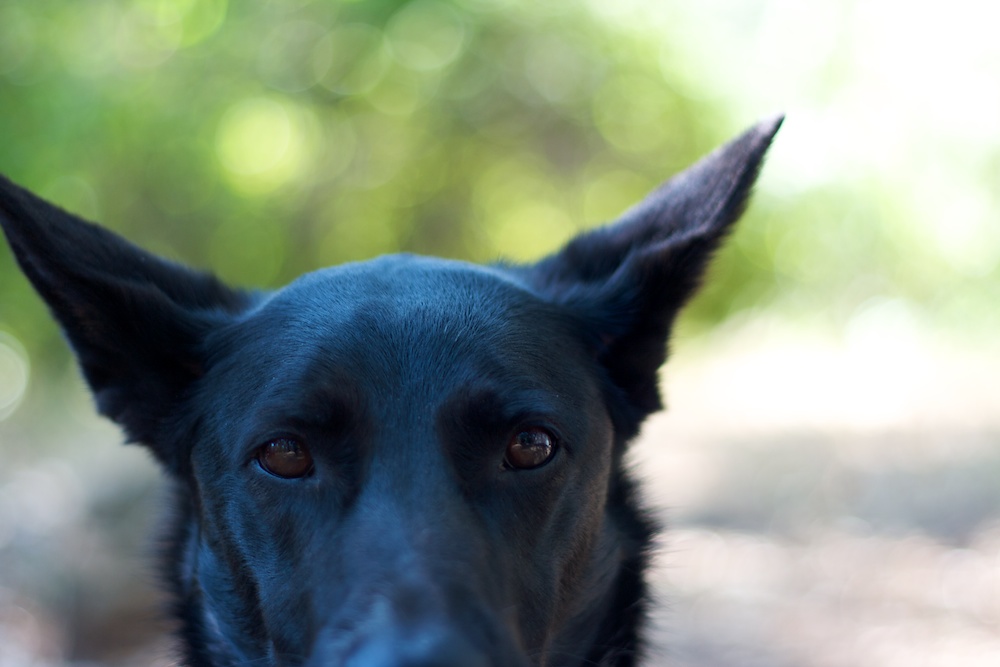 A nice image might help set the tone for the weekend to come.
We’ll start with the blue dog, who enjoys a nice bokeh, a shallow depth of field, and winning staring contests.
Unless otherwise specified, all photos are taken by me.

Discovered this band via KCRW about 6 months back. Mellow, catchy electronica influenced alt rock if you want a genre (that exists, right?). Highly recommended. This is their first music video. You can find more of them on iTunes.

I realized at a certain point last year that my online presence was scatterbrained at best. Granted, I was online all of the time, but I wasn’t exactly moving my creative self forward. I needed to express myself, engage in a varied series of conversations about topics I care about with random people around the world. I needed to be more visible. But mostly importantly, I needed to get off my ass and give myself a project that would force me to write. Hello project.